The bottle transition that every baby will face.

What is a sippy cup?

A sippy cup is a training cup – usually plastic – with a screw- or snap-on lid and a spout that lets your child drink without spilling. You can get models with or without handles and choose ones with different types of spouts.

Sippy cups can be a great way for your baby to transition from nursing or bottle-feeding to a regular cup. They can also improve hand-to-mouth coordination. When your baby has the motor skills to handle a cup but not the skills to keep the drink from spilling, a sippy cup can give him some independence while keeping clean-up to a minimum.

When should I introduce a sippy cup?

Encourage your child to use a training cup whenever you think she's ready. Some babies enjoy using a sippy cup as early as 6 months, and others aren't interested until after their first birthday.

To prevent tooth decay, the American Dental Association recommends transitioning from a bottle to a training cup by your child's first birthday.

From solid food to sippy cups, spoons, and kids' ability to feed themselves, here are the major eating milestones and when to expect them.

What's the best way to transition to a sippy cup?

Some babies take to a sippy cup immediately, and some take a while to get used to the idea. (Some may never use one.) Here are some tips for introducing the sippy cup:

·         Start off with one that has a soft, pliable spout because this feels more familiar to your baby than a hard plastic spout.

·         Show your baby how to raise the cup to his mouth and tip it up to drink. Show him that the spout is like a nipple by touching the tip of the spout to the roof of his mouth to stimulate the sucking reflex.

·         Give it some time. Until your baby masters the technique, you may want to put only water in the cup to avoid too many messes. And don't worry if your baby doesn't take to the sippy cup right away. Just wait a few weeks and try again.

·         Shop around. There are all kinds of sippy cups, with all kinds of spouts. Sippy cups aren't too expensive, so it's worth letting your baby test-drive several if one isn't working. Try different models until you find one that suits your baby.

What should I do if my child refuses the sippy cup?

Babies have all kinds of reasons for rejecting sippy cups. And of course, there's no law saying she ever has to use one. Some babies go straight to a regular cup from the breast or bottle. But if you want your baby to use a sippy cup, try these tactics that other parents have used successfully:

·        Dip the spout into breast milk or formula before giving it to your baby. Another approach is to put a bottle nipple (without the bottle) in her mouth and after she starts sucking, replace it with the sippy spout. Some parents have even had success simply substituting the sippy cup for the bottle.

·         Switch halfway through a feeding. If she drinks from a bottle, give her half of her formula or breast milk in the bottle. When it's empty, switch to the sippy cup for the second half of the feeding. (Continue to hold her as you do when she's bottle-feeding.)

·         Modify the sippy spout. Some cups have valves that are so effective at keeping the liquid from spilling that it's a lot of work to drink from it. If your baby sucks on the sippy spout but doesn't get anything, try taking out the valve that controls the flow (if the sippy cup has one of these and it's removable).

·         Work in reverse order. Teach your baby to drink from the sippy without the lid on it first. Put just a teaspoon or two of liquid in at a time and help her raise the cup to her mouth. After she gets the hang of that and understands that there's liquid inside the cup, put the lid on (without the valve, if there is one). Finally, put the valve in and let her take over.

·         Offer your baby a straw. Some cups come with a built-in straw, and some babies find these easier to use than a spout. If your baby does get the hang of sucking from a straw, she may then be better able to handle sucking from the spout.

·         Try other beverages. Some babies will drink water or juice – but not breast milk or formula – from a sippy cup. (But don't give juice to a baby younger than 1 year, and limit juice for toddlers to 1/2 cup a day.)

·         Show your baby how it's done. Get a clean sippy and let your baby see you drink from it. Or have a sibling drink from a sippy in front of the baby. Sometimes making a little sucking noise is all it takes to inspire a baby to start sucking. Just be sure to give your baby a clean sippy cup. Sharing a cup with your baby can increase the amount of tooth-decaying bacteria in her saliva.

What not to do 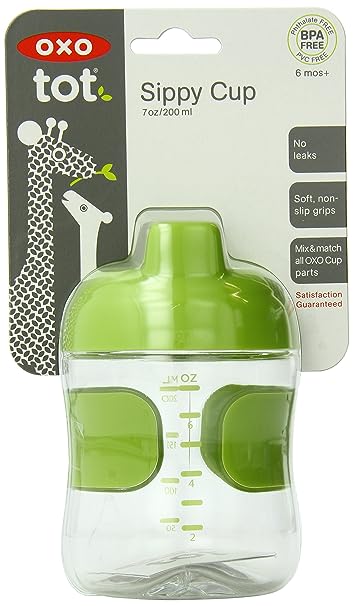 Using a sippy cup may seem like a piece of cake, but there are some pitfalls you'll want to avoid:

·         Never let your child take a sippy cup of juice or milk to bed. The sugars can pool in his mouth and cause tooth decay. The same goes for walking around with one in hand for hours on end. One idea is to limit juice and milk to meals and snack time, and refill his sippy cup with water when he's thirsty.

·         Clean the cup thoroughly (especially the lid and plastic stopper) between uses. Liquid can easily become trapped in the nooks and crannies of a sippy cup and valve, leading to the growth of bacteria and mold.
If you can't wash a sippy cup right away, at least give it a good rinse. If that's not possible, drain any remaining liquid and take it apart. Periodically check your lids and valves for damage or mold.

·         Don't expect the sippy cup to be the magic answer to weaning. For some babies, it simply replaces the bottle and presents another weaning challenge.
Still, many parents find it more acceptable to see their growing child with a sippy than a bottle in hand. And if used properly, a sippy cup can be less damaging to your baby's teeth than a bottle.

·         Don't use the sippy cup for too long. As soon as your child can handle it, switch to a regular cup. Most toddlers can manage a two-handled open cup by the time they're 2 years old.

What and how much should I give my baby each day in her sippy cup? If your baby is younger than 6 months old, simply give her a portion of her breast milk or formula in the sippy cup each day.

Generally, water and juice are unnecessary for breastfed and bottle-fed infants in the first six months of life. (And don't give your baby cow's milk until she's at least a year old.)

After six months, if your baby's thirsty between feedings, refill her sippy with water.

Babies 6 months and older can be given up to 4 ounces of 100 percent fruit juice a day in addition to formula or breast milk. (But don't give it at bedtime to prevent tooth decay.)

Once your child starts drinking whole milk (at age 1), experts recommend giving her no more than 32 ounces of milk and a half cup of juice per day. Otherwise your toddler may be more likely to get cavities and be too full to eat at mealtime.

Are there safety concerns I should be aware of?

Plastics in baby bottles used to be made with the chemical bisphenol A (BPA), but this has been banned since 2012. (And many manufacturers had already stopped using BPA before that because of public concerns over exposing children to this chemical.)

Just to be safe, don't let your child drink from a plastic cup or bottle that is scratched or damaged. A worn cup with scratches is more likely to harbor bacteria and may leach chemicals.

But any plastic can leach chemicals. Two recent studies even found that some BPA-free cups leach even higher amounts of synthetic hormones than those made with BPA. If you're worried about plastic, consider using steel or glass cups.